JUNE. Cauliflower and Leek soup, with a boost

This recipe is based upon the popular Cauliflower soup used as part of the 5.2 diet. This makes 2 serves at about 90 calories a serve.  I have added 2 handfuls of greens from the garden at the end of the cooking time. This make the soup a lovely green colour and adds a nutritional boost.
Posted by elizabeth at 8:55 PM No comments:

What is in Season Now, MAY

I love Autumn.  A visit to the Produce Swap Stall at the Woodend Framers Market only confirms this.  Such a variety of goodies and such generous participants willing to share their bounty.
I thought I would suggest some recipes that could be useful for members.
Two recipes I have made this week were Jerusalem Artichoke Soup and an Apple Tart Cake.

Method
Saute onion and celery on Olive oil for 5 minutes
Add carrot and Artichoke and saute for a further 10 minutes.
Add water or stock, make sure it covers veggies. Cook for 20 minutes.
Test to see Carrot is cooked. If not give it another 5 minutes.
With a stick blender, blend until smooth and creamy.
May need to add more water/stock to get to consistency  required.
Top with sour cream or yoghurt and chopped chives and parsley.

Notes
I make my own stock paste and add a dessertspoon, could add a couple of chicken or vegetable soup cubes.
We had no problems with flatulence .

Yesterday,  had lunch at the Newham Store.  Had a hot sausage in a fresh roll,  served with the most flavoursome chutney.  This is my take on it.
Makes 4 serves.  Easily doubled.  Can be made ahead and reheated.
Serve with grills or roasts,  or even by its self.

In medium size frying pan,  add oil and cook carrot , celery, onion and garlic until some brown   edges show on carrot.  Stirring so that onion doesn't burn.
Add remaining ingredient and a little water .
Cover pan with lid and cook until carrot is cooked.
Remove lid and reduce liquid.
Add salt and pepper as required.

Notes
Could use small fennel bulb instead of celery
Posted by elizabeth at 2:42 PM No comments: This recipe is adapted from the April/ May Dish Magazine.  The dressing can be made in the TMX  or by hand, but the green vegetables are best if sliced on a mandolin or with a very sharp knife.
It is nice to be able to use veggies from the garden and the Green Tomatoes and Zucchini are both the last of the season.
I have doubled the dressing ingredients as it is particularly nice and could be served with any salad.
This makes 6 generous serves.

Dressing
Add all ingredients to a bowl or TMX bowl and mix on speed 5 for 5 seconds.

Shave all vegetables into a large bowl and toss with salt and pepper . If making ahead, add salt and pepper just prior to serving.
Arranged on a large platter and scatter with, fennel fronds, lemon zest and walnuts.
Drizzle with some of the dressing.

Note
I served this salad with fish in egg and bread crumbs and TMX mashed potatoes.

Posted by elizabeth at 6:56 PM No comments:

Email ThisBlogThis!Share to TwitterShare to FacebookShare to Pinterest
Labels: salad 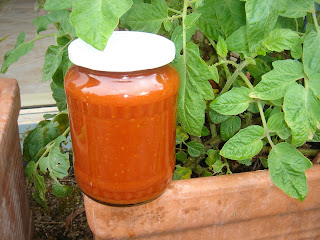 Made with home grown cherry tomatoes, (seeds from Diggers,) this is the most full flavored sauce you could imagine. There is no onion, so will keep well.

Place all ingredients except sugar, in saucepan and cook for 30 mins.,
Push through a strainer  to remove seeds.

Add sugar, to strained juice and simmer  for 60 mins.
Bottle into sterilized jars.

The original recipe for this came from the Victorian Department of Agriculture booklet about 60 years ago.  I have adapted it to suit any Citrus fruit and even add Grand Mariner to some jars.

Ingredients
350 g lemons , washed
100g grated carrot
500 Mils of water
1 tablespoon of lemon juice and pectin if necessary. I use Jamsetta.
Sugar,  which will be 3/4 of amount of liquid in pot.

Place 2 small saucers into freezer. This is for testing set of marmalade
Cut lemons in 1/2 and slice into thin 1/2 moons. Remove seeds.
Place grated carrot and sliced lemon, lemon juice and water into large pot. Lid off.
Simmer for 30 minutes or until rind of lemon is very soft.  Finger nail should easily go through rind.
For each cup go liquid in pot,  add 3/4 cup of sugar.  I usually have about 1 liter of liquid so add  750 gs of sugar.
Stir sugar while Marmalade is coming to the boil.
Boil briskly until set. Skim off any scum that floats to top.     Test after 15 minutes on saucers.  Put  about 1 dessert spoon of jam on saucer and place back in freezer.  After 5 minutes,  run finger through jam.  If it wrinkles and stays apart ,  then it will set.  If not , boil for another 5 minutes.  Test again.
When setting is reached, pour into sterile jars.  Put lids on immediately and carefully turn upside down.  After 10 minutes turn up right way.

This makes a very tasty sweet Marmalade.  It can be used in place of mixed peel in cakes, at base of puddings, poured over lemon cakes and od course on toast for breakfast.

You can substitute any citrus for the lemons .
You can double the recipe,  but cook for a little longer.

Posted by elizabeth at 8:09 PM No comments:

This is very easy and can be served straight or over ice or with ice and Ginger Beer.
The bonus is that there are plums over that can be used in jam or a Crumble
This recipe and photo are from Isi,  who lives in Portugal.  I have adapted the recipe from the one she published on Forum Thermomix.

Method
Steam plums for 30 minutes.  Allow to stand for 15 minutes after steaming to drain all the juices.
Add sugar and Vodka to liquid and simmer for 5 minutes.
Bottle into sterilized bottles. 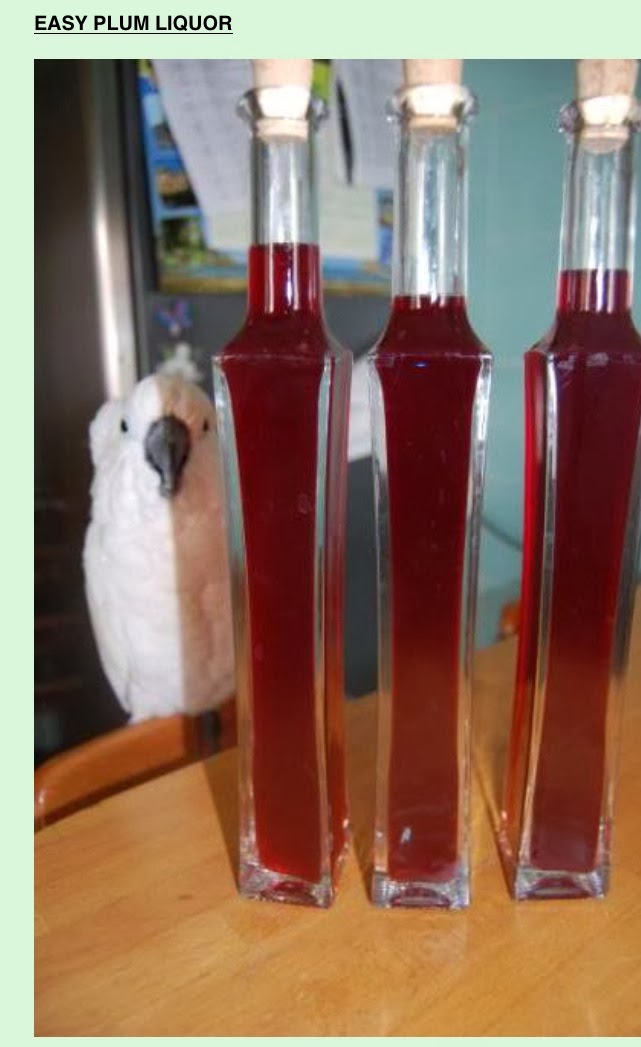 Posted by elizabeth at 5:28 PM No comments: